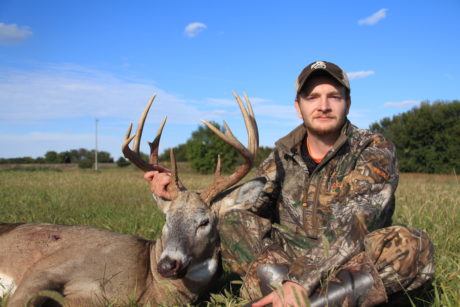 Brody Vorderstrasse started June 1st with Central Platte Natural Resources District as a Communications Assistant. Brody is originally from Glenvil, Nebraska. During his childhood Brody participated in 4-H showing cattle, sheep, and horses. He also spent a lot of time in the outdoors hunting deer, turkeys, and snow geese.

Brody went to college at the University of Nebraska-Lincoln. He graduated in 2017 with a degree in Fisheries and Wildlife and a minor in Animal Science. After college he moved to Iowa to work with two online hunting shows, Midwest Whitetail and The Hunting Public. While he was there, he was mainly a videographer, but also helped produce podcasts, social media content, and edited video blogs.

After a year and a half, Brody moved back closer to home and started a job with Nebraska Game and Parks Commission (NGPC) as a public information officer. During his tenure with NGPC he assisted the communications staff with posting and creating social media content, producing “Learn to Hunt” videos for the Nebraska Outdoor Education Center to teach new hunters about hunting, and created short films and promos to help promote the outdoors in Nebraska.

Brody is excited to get started working with the NRCS, Central Platte NRD, and Rainwater Basin Joint Venture. Brody recognizes the importance of these three organizations and is looking forward to telling that story along with showcasing the people that make that happen behind the scenes.